Monday evening, the Young Americans for Liberty board of directors released a second statement following public backlash to YAL President Cliff Maloney and board chair Jeff Frazee’s initial response to several allegations of sexual misconduct that surfaced on social media over the weekend. Seen as defiant and dismissive, the first statement provoked outrage when it was posted on Twitter.

Shortly after rumors that the board was meeting with YAL staff, Regional Director Tony Gaujardo tweeted, “A statement from @YALiberty is coming soon. Cliff has been placed on administrative leave. I support the ladies of our movement and the statement from Cliff on Saturday does NOT reflect the stance of me personally nor this organization.”

A statement from @YALiberty is coming soon

Cliff has been placed on administrative leave

Within an hour, an official statement was released on the Young Americans for Liberty Twitter account (as of Tuesday morning, it has not been posted to their Facebook page). “YAL will address these issues head-on and begin the process of healing and rebuilding a culture of trust, safety, and accountability.”

“YAL will address these issues head-on and begin
the process of healing and rebuilding a culture of trust, safety, and accountability.”https://t.co/g8Tb8Xm4WL 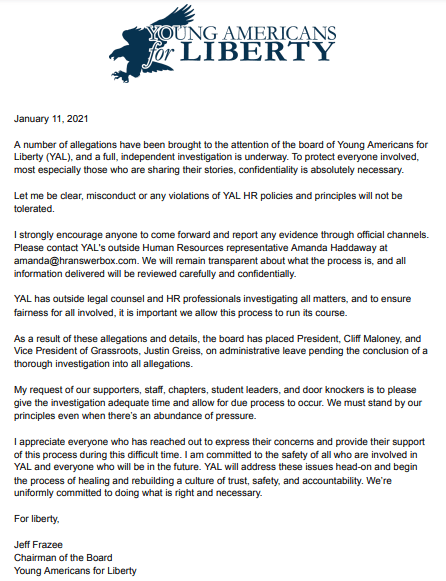 In the statement, board chairman Jeff Frazee emphasized the organization’s commitment to an independent investigation and transparency regarding the process. Anyone with evidence was encouraged to contact YAL’s outside HR representative, whose name and email were included.

Also in the statement was action which many had been demanding on social media. “As a result of these allegations and details, the board has placed President, Cliff Maloney, and Vice President of Grassroots, Justin Greiss, on administrative leave pending the conclusion of a thorough investigation into all allegations.”

Former Maine state senator and current YAL policy advisor Eric Brakey tweeted, “All of us who love @YALiberty have been shaken by the allegations made against some leaders at the organization. After a staff meeting this evening with the Board of Directors, I can say with full confidence that these allegations are being taken very seriously.”

Other staffers, such as Data Director Stuart Henchman expressed relief. “It’s been an emotional few days. I want to talk about it but that can wait. Let’s make right now about making sure victims are heard and people are held accountable. But what I will say is this evening was the first time I felt positive and optimistic in a few days.”

While responses to the organization’s statement on Twitter were cautiously positive, many had questions about the process. Some also questioned Frazee’s alleged prior knowledge of the incidents and whether that would be addressed.

Former Congressman Justin Amash, who had publicly called for a better response from YAL, responded, expressing his thanks and some advice.

The investigation also should examine why these basic measures weren’t implemented much sooner, but this is an important first step. Thank you.

Young Americans for Liberty is encouraging anyone to report any allegations or evidence regarding such to their third party HR department at (703) 338-7176 or amanda@hranswerbox.com. They have not yet stated who will serve as interim president for the organization during the ongoing investigation.