In the early hours of Saturday morning, Congress voted to approve the American Rescue Plan, President Biden’s $1.9 trillion Covid-19 relief bill. Contrary to its name, the plan does little to ‘rescue’ average Americans.

Much like the CARES Act, the American Rescue Plan is an omnibus budget bill, which allows Democrats to use the budget reconciliation process to avoid a filibuster in the Senate. Also like the CARES Act, this Covid relief package is stuffed full of partisan waste and pet projects, including a $15 minimum wage increase and over $100 billion for public schools whether they open or not. Less than 9% of the $1.9 trillion bill is allocated to Covid-related public health spending.

Following the early morning vote, freshman House Representative Peter Meijer (R-Mi) tweeted about the legislation, calling it an “institutional abomination” and proposing his own alternative—Direct Dollars Over Government Excess, or the $DOGE Plan.

Tonight we voted on the American Rescue Plan. Briefly put, this was an institutional abomination. Not only is this bill dead on arrival in the Senate bc the Senate parliamentarian judged it out of order via the Byrd Rule (which governs the Budget Reconciliation process)… (1/6) pic.twitter.com/IvdZZN1v4Y

My plan, ‘Direct Dollars Over Government Excess’ (or $DOGE Plan) almost doubles $$$ to Americans who need it most with $2400 checks (not Pelosi’s $1400) AND at half the cost! My question to @SpeakerPelosi: why are we spending 2x more and giving people way less?!? (4/6) pic.twitter.com/o51yXFgsvo

Meijer claims his proposal funds all urgent essentials and increases the direct cash payment to $2,400 as opposed to the $1,400 included in the current omnibus bill. The $DOGE Plan was scored by the Committee For a Responsible Federal Budget and found to save $1 trillion dollars. Income thresholds are lower than the Democrats’ plan, with single filers receiving $2,400 which would phase out at $40,000 and cap at $50,000. Dependent adults and children would qualify for $1,200. Unemployment benefits would be extended at $200/week through June 29, before dropping to $100 until Labor Day. The Democrat proposal allows for $400 through August 29. 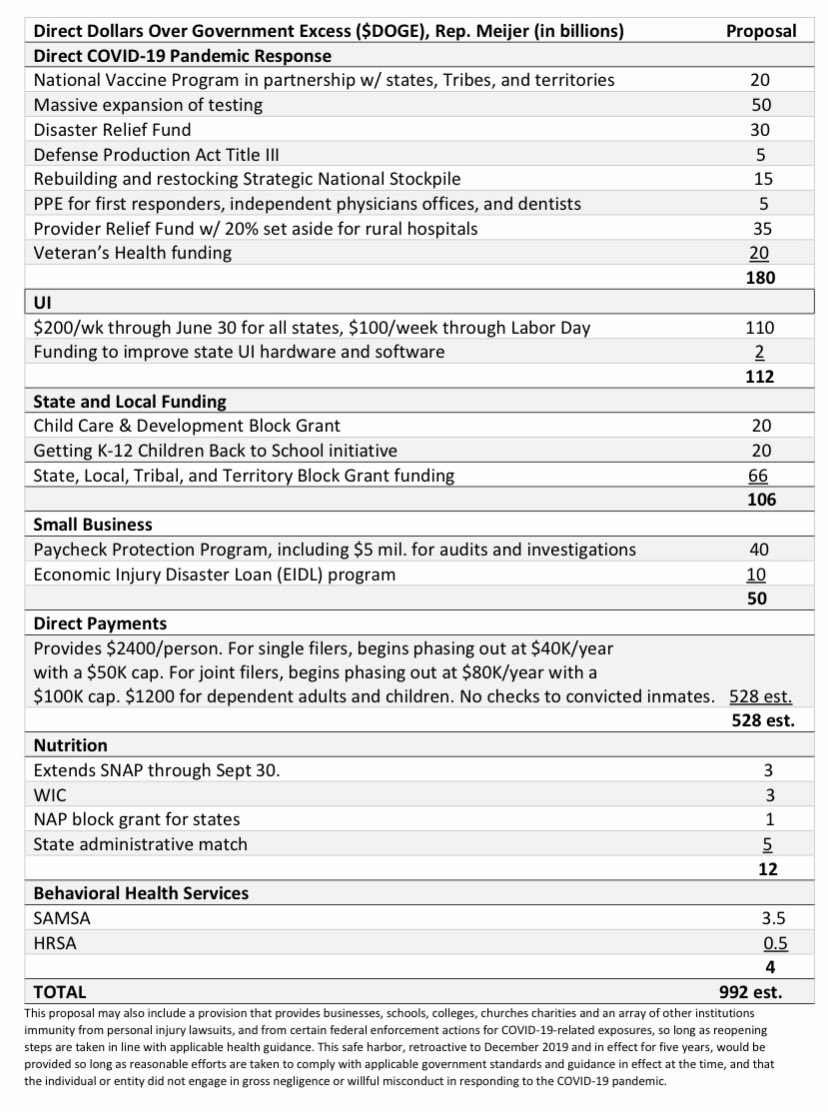 Meijer urged Speaker Nancy Pelosi to “Consider $DOGE. Give people $2400 not $1400. Focus relief where it’s needed, not on random miscellany.”

@SpeakerPelosi: Consider $DOGE. Give people $2400 not $1400. Focus relief where it’s needed, not on random miscellany.

I voted no on the American Rescue Plan & hope when the Senate kicks this back that my Democratic colleagues will refocus & direct money where it matters. (6/6) pic.twitter.com/WYQe0qKGao

Since winning the seat held by retired Libertarian Congressman Justin Amash, many have watched Representative Meijer with interest as he responded to the January 6 attack on the Capitol and the ensuing second impeachment of former President Donald Trump. Like his predecessor, Meijer voted in favor of impeachment. His $DOGE Plan also brings to mind Amash’s proposal nearly a year ago, when the CARES Act was being debated.

At the time, Amash advocated for immediate, direct, universal relief payments for a minimum of three months—”unless the lockdowns end sooner.” Little did anyone know those lockdowns would last for a year or more. Even then, Americans would have received greater benefit from Amash’s plan, just as they would with Meijer’s current plan.

Provide $1,250 per adult and $500 per child for each of the next three months, unless the lockdowns end sooner. After the third month, Congress can renew, modify, or discontinue these payments as appropriate.

This is a better use of taxpayer money than all the other things being discussed. Don’t create a bunch of complex programs or targeted appropriations. If Congress is looking to spend more money here, just give it to the people.

The current $1.9 trillion relief bill has been sent to the Senate where it may be voted on tonight. If passed by the Senate, it will then return to the House for final approval. Democratic leadership cannot lose more than four votes if all Republicans vote against it. Some major obstacles have been removed, such as the exclusion of the $15 minimum wage provision after the parliamentarian determined it violated Senate rules. Other changes included phasing out checks more quickly for those making above $75,000, and removal of funding for projects, such as transit rail in California and Seaway International Bridge in New York. Senate Republicans have indicated they will force a full reading of the bill, which could take as long as 10 hours, before the vote-a-rama.

The post Rep. Peter Meijer Urges Pelosi to Give Americans More Relief With the $DOGE Plan appeared first on The Libertarian Republic.